“Look Up!”: A Timely Reminder

A tough time on my mission and a special friend helped me have faith and remember what life is all about: looking toward our Savior.

It was my first week as a missionary in the rice fields of Japan; I was homesick, illiterate, and lost. The thought of going to church terrified me—other than a memorized testimony from the MTC, I spoke little Japanese, and opening my mouth was a burden. 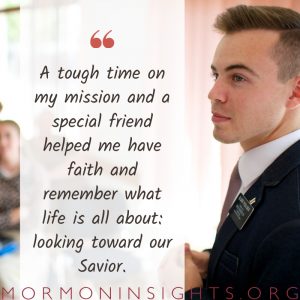 That first sweaty Sunday, the branch president learned that I could play the piano. He marched me to the electric upright to accompany sacrament meeting. I was relieved that this would be my only duty, and I found comfort in the familiar hymns (no comfort in the Japanese, though). During the prelude, I looked up to see a beautiful woman in her late 50s standing in front of me. She asked me my name. I timidly smiled, doing my best to remember my new title. “I’m, uh, Sister McClellan.” She beamed. Then she asked how old I was. “Umm … 91 years old?” I guessed. She doubled over laughing—I had mixed up the tens and ones, and my mistake was, obviously, hilarious to her. I was embarrassed, but her positive spirit and willingness to treat me equally were reassuring. After church, I learned that her name was Sister Aoba. During my time in that branch, Sister Aoba was especially kind to me, and as my language skills developed, we were able to communicate. She was sarcastic, strong, and positive. We grew close, and by the time I was transferred, I saw her second mom.

About a year into my mission, my grandparents, whom I was very close with, died. I was depressed. I couldn’t fathom why God had sent me halfway around the world to do his will, only to be separated from my family during a difficult time for all of us. My prayers seemed unanswered. To counteract my feelings of isolation, I wrote emails to friends and family asking how I could accept God’s will. I also wrote a letter in my chicken-scratch Japanese to Sister Aoba.

One day, a big, fat letter dropped into our post box. Sister Aoba had painstakingly handwritten a reply to my questions about accepting God’s will and had included a copy (in English!) of Elder Choi’s talk, “Don’t Look Around, Look Up!” She wrote that Elder Choi’s message was what she and Brother Aoba turned to in hard times, and she encouraged me to “look up to Christ.” I had been mourning my grandparents for weeks, and even though I was still sad, her message gave me the courage and faith to move on with the right focus.

I was overcome with gratitude for Sister Aoba’s time and effort. She answered my prayer of helplessness and pointed me towards Christ in a time when I wanted nothing to do with him. Because of her, I was able to finish my mission with Christ’s will in mind. Sister Aoba’s example of positivity and faith was what I needed then, and her light is still a reminder to me today to “look up.”

Tagged  Accepting God’s Will, Casey McClellan, Courage, Don’t Look Around, Elder Choi, Focus on the Savior, Light at the End of the Tunnel, Look to the Savior, Look Up, Missionary Service, Positive Attitude, Service.
Bookmark the permalink.