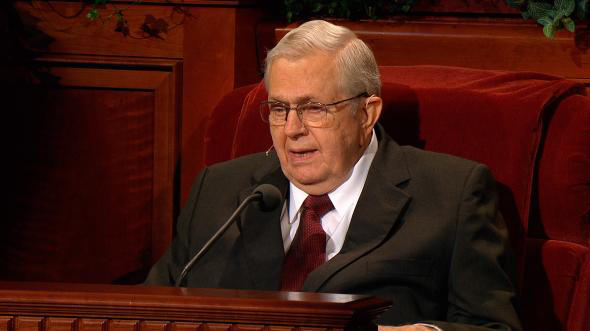 With a loving family, incredible artistic talent, and an ever-present sense of humor, Boyd K. Packer, President of the Quorum of the Twelve Apostles, led a rewarding and fulfilling life. 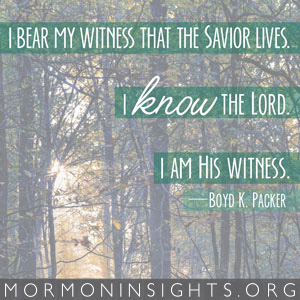 President Boyd K. Packer, who passed away July 3, 2015, at the age of 90, faced life with a characteristic sense of humor and good will. Toward the end of his life, President Packer shared in general conference a few lines of a poem he had begun writing at age 68 and added to over the years. The poem includes these lines: “The years have flown so fast. / I walked, I limped, I held a cane, / And now I ride at last,” referring to his wheelchair.

Born in 1924 to Danish parents, President Packer faced severe health challenges in his early years. The Mormon Newsroom obituary for President Packer explains that he contracted polio at age 5. This serious disease was dangerous even for adults, but President Packer pulled through it, using his love of art as a way to keep himself busy when he was too sick to get out of bed.

For the rest of his life, he pursued his artistic talents, painting and sculpting a variety of animal subjects, particularly birds. A tribute to President Packer’s art and sculptures can be found at BYU’s newly remodeled Monte L. Bean Life Science Museum. An entire wing of the museum honors President Packer and his love for nature and art.

After serving in the US Air Force during World War II, President Packer met and married Donna Smith in 1947. They settled on a farm in South Salt Lake, where they were devoted to their family. “Of all the places in the world,” President Packer said, “—and I’ve seen some interesting and enticing ones—I’d rather be home than anywhere else.”

In 1961, he was called as an Assistant to the Quorum of the Twelve Apostles, a position that no longer exists. This calling allowed him to learn from the Apostles and work closely with them prior to his own calling as an Apostle in 1970. In 2008, he was called to serve as the President of the Quorum of the Twelve Apostles when Thomas S. Monson became the President of the Church.

Of his childhood, President Packer wrote: “Sometimes in my growing years I thought we were poor. I later learned that that was not true. We just didn’t have any money. We were always rich in the things most significant in our lives.”

Read the full article, “President Boyd K. Packer: The Artistry of an Apostle.”

Watch President Packer’s unshakeable apostolic testimony (and hear the rest of his poem) in one of his last general conference addresses.

Read President Packer’s witness of the importance of marriage and the family in his final general conference talk in April 2015.

See the stirring tributes to President Packer, the President of the Quorum of the Twelve Apostles, at his funeral services.