Just when life felt unbearable, a man found courage through prayer to keep living and to start changing. 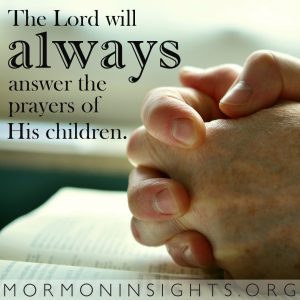 At one point or another, each of us has made mistakes that result in the absence of the Spirit, leading to a feeling of darkness. If we don’t address these mistakes quickly through repentance, the darkness can last for weeks, months, and even years. This darkness often brings doubts, questions, and insecurities, both about gospel teachings and about our personal worth. We can find ourselves confused, without hope, and sinking further into spiritual darkness.

Such was the case with Mike, as he recounts in the video “Returning to Prayer.” After years of struggling with low self-esteem and drug and alcohol abuse, he received the news that his father had passed away. “My father was my rock. He was my foundation,” Mike says. The loss of his father was a deep emotional blow, and lost in his sorrow, Mike began wishing that he didn’t exist. With raw honesty, he shares, “I wanted God to get rid of me. I thought he had made a mistake in creating me and that I was worthless.”

After months of suffering with these terrible feelings, Mike happened to look at a picture of Christ that his father had drawn. “I had the thought come into my mind, ‘Mike, get down on your knees and say a prayer.’” Once on his knees, the only words that Mike could manage were “help me.”

“As soon as those words left my lips,” Mike says, “I felt [God’s] embrace and I knew that he loved me. I knew that I was worth something to him.” Light had begun to break through the darkness. Prayer was the key in releasing Mike from his mental and emotional prison. The prophet Enos similarly experienced a situation in which he was overcome with feelings to commune with the Lord: “My soul hungered; and I kneeled down before my Maker, and I cried unto him in mighty prayer and supplication” (Enos 1:4-5). The Lord answered Mike’s and Enos’s prayers, just as he will answer ours.

Everyone who reaches out to the Lord in prayer will receive answers. His answers may not come as we expect and may not be the answers that we want or think we need, but the Lord will always answer the prayers of his children. By praying, we exercise faith and open the windows of heaven to blessings and knowledge of our worth to God.

Mike’s desperate prayer was the beginning—not the end—of his personal journey to redemption. To learn how prayer continued to play an important role in Mike’s life, watch “Returning to Prayer,” part of the video series called His Grace.

Study the full account of Enos’s prayer in Enos 1.

Are you wondering how to know when your prayers have been answered? Find tips in Elder Richard G. Scott’s talk “Learning to Recognize Answers to Prayers.”